One of my favorite stories as a child was The Neverending Story where Bastian is called out to save the wondrous land of Fantastica from total destruction. The Nothing is slowly but surely consuming everything in its path, leaving a void of nothingness where once was life, colors and joy thriving in harmony. Everything and everyone in Fantastica are trying to escape this unspeakable menace of darkness and destruction, all flocking toward the Ivory Tower hoping that the empress can save them from total annihilation.

The ultimate solution to stop this juggernaut of destruction is as beautiful as it is simple: Bastian must shout his dead mother’s name. This does not just miraculously restore all of Fantastica to its former glory but also ensures its neverending expansion. But why does it have to be his mother’s name? Why not something else? Because the love he feels for his late mother is the purest form of unconditional love that is available to him. His mother’s name is therefore merely a symbol. The real healer here is the feeling of unconditional love it triggers within him. It didn’t even go on to repair anything. It just miraculously undid the rampages of The Nothing as if they had never happened in the first place.

This is beautiful. And as a student of A Course in Miracles there is a lot to appreciate in the message of The Neverending Story.

Most people would be able to answer the first one quite easily. Nothingness is nothing. It’s the absence of something, anything and everything. It doesn’t exist. It’s as simple as that.

And darkness? Does it exist? Although darkness can feel very real in the blackness of your bedroom it doesn’t change the fact that it is simply the absence of light. Nothing else. According to A Course in Miracles darkness possesses no qualities of its own because light abolishes darkness merely by showing you it is not there. You cannot pour darkness into a lit room, but you pour light into a darkened room every time you flip the light switch. 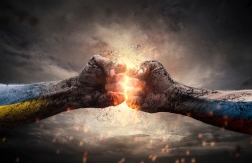 Then what about fear? Arguably the single most dominant force in the world of man. Fear tears us apart emotionally. Fear judges. Fear leads us to war with ourselves, our lovers, our friends, and our enemies alike.

Yes it could. And as a student of A Course in Miracles I am getting increasingly certain that it is.

The Course teaches that only love is real. All else is an illusion of the mind. But then how can all the fear, misery and suffering in our lives, not to speak of in the world as a whole feel and look so real? There is unfathomable misery experienced by the millions on our planet every day. How can this not be real?

Although something painful may in fact seem and feel very real, it is also a matter of perception. Fear and suffering is subjective, felt in varying degrees depending on who is feeling it. It is, however only felt by the one who suffers. Anyone else can only empathetically imagine it, but not experience it. It is not their reality. Yet, it can feel very real because it has been made by our mind, and we will believe in everything we make. All beliefs are real to the believer.

You can make up a lie. You can tell this lie to a million people and these people all believe you. That doesn’t make your invented construct any more true or real, although it will feel real to the the one million people who believe you. What happens when the light of truth shines on a lie? The perceived realness of the lie dissolves as if it never existed at all. Do you remember Bernard Madoff’s ponzi scheme where countless of people’s savings vaporized in thin air as if it were never even there? In truth their money was gone as soon as it was put in the hands of Madoff, and their previous belief in that their money was safe did not in any way alter the fact that their savings no longer existed.

If we as human beings can accept that fear and love share the exact same relationship to each other as darkness does to light, it will transform our entire destiny. Because we will learn that the only cure to fear and suffering is love.

The Course teaches that whenever you find yourself in pain, a very appropriate question you can ask yourself is where am I not giving love in this situation? Contrary to popular belief giving love freely is never painful. It is when we close our hearts and start withholding love that the pain begins.

Just think about it. What if fear, pain and suffering don’t really exist, but are only constructs of our delusional and out-of-control minds? Constructs we insist on believing in like we believe in so many lies we individually and collectively have made up. What if we could eradicate fear in our own lives simply by just loving more? What if we, like Bastian, had a magical word that could undo all the negativity that diminishes our enjoyment of life?

What if we as a culture and as a species haven’t yet evolved into living in love and harmony with each other, nature and the rest of the planet? (See, it doesn’t sound as crazy anymore, does it?). And what if the one thing that is missing every single time something is out of whack is something as simple, but yet infinitely powerful, as unconditional love?

Now that would be a revolution.

© Kristian Sæterhaug and kristiansworld.com, 2012-2015. Unauthorized use and/or duplication of this material without express and written permission from this blog’s author and/or owner is strictly prohibited. Excerpts and links may be used, provided that full and clear credit is given to Kristian Sæterhaug and/or kristiansworld.com with appropriate and specific direction to the original content.

All photos and graphic materials on this blog are either owned by Kristian Sæterhaug or used with permission.